Admiral Oink is a unused boss character from Battletoads (Arcade).

Oink appears as a large swine dressed in a Santa costume. He was originally going to serve as the boss of stage 2, with his attacks involving dropping bombs from his bag and stuffing the player into the bag. He has a complete set of sprites in the game's data, and a portrait of him can still be seen in Stage 5.

Oink also appears in the TV pilot as one of the Dark Queen's regular mooks, being given a more plain design.

Admiral Oink's portrait which appears in the penultimate stage 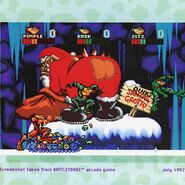 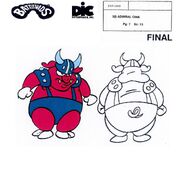