Princess of the Terran Corporate

Angelica is the princess of the Terran Corporate and daughter of the Terran Emperor. According to her official bio, she holds the title of "Starchild of the Blood", possessing latent magical powers and a suppressed dark side. In the original Battletoads the Dark Queen kidnaps her, with the apparent intent of holding her for ransom and overthrowing the Emperor. She appears as a human female with blond hair wearing a white dress (blue in the Amiga version of the game), not serving any bigger role other than being a distressed damsel for the heroes to rescue.

In the animated series pilot, Angelica's role is greatly expanded. She is sought by the Dark Queen for a magic amulet she possesses, and gets a job at a donut shop to blend in on Earth. She was voiced by Lalainia Lindbjerg. 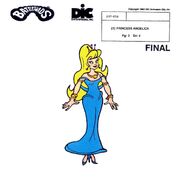