Edit
watch 01:36
We're Getting Mutants in the MCU - The Loop
Do you like this video?
Play Sound

Battletoads for the Game Boy (not to be confused with Battletoads in Ragnarok's World, which is a port of the NES game) is the second game in the Battletoads series.

While partying on Lost Vega, a deep-space leisure station, the three Battletoads - Zitz, Rash and Pimple, get pleasantly side-tracked by a Thallian Thorax Dancer. Unfortunately, the dancer isn't what she appears to be - and soon reveals herself as the evil Dark Queen!

The 'toads fight valiantly against overwhelming odds, but are eventually overpowered. Yet, all is not lost! Although Rash and Pimple are taken prisoner, Zitz makes it to the Toadster and burns space back to the Vulture and Professor T. Bird, the Battletoads' mentor. Rash and Pimple are taken away in the Gargantua to the planet Armagedda, but luckily Zitz and the Professor are hot on their trail...

Professor Bird's gonna set you down on Armagedda, but from then on it's up to you. You've got a long way to go, Zitz - into caverns, across swamps and even through the belly of the dreaded Wurm. And ultimately, of course, you're gonna have to defeat the terrible, the towering, the truly 'toadsplatting Robo-Manus mutant!

Have you got what it takes to be a bona-fide Battletoad? We'll soon see, one way or another...

As with the NES version, the gameplay is a mix of side-scrolling fighting and various vehicle races. When fighting, Zitz is capable of unleashing powerful Smash Hits to finish off weakened enemies. Vehicle stages put a stronger emphasis on memorization and speed. Almost every stage finishes with a battle against a boss.

Zitz is given three lives and three continues to complete the game, after which he must start over. 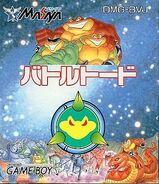