Battletoads in Battlemaniacs is the third game of the Battletoads series. It was released by Rare for the Super Nintendo home console. A port for the Sega Master System was also released by Brazilian company Tec Toy in 1996, though this was an incomplete build of the game with music, pallete and scrolling glitches during the motorcycle bonus stages.

In addition to obvious graphical and audio improvements, Battlemaniacs also has a slightly more involved plot, based on characters and concepts introduced in the Battletoads comic seen in Nintendo Power magazine.

At a converted fortress, Gyachung-La, high in the Tibetan mountains, the Psicone Corporation is testing its latest invention - the T.R.I.P.S. 21, an acronym for Total Reality Integrated Player System. T.R.I.P.S. 21 allows a person to actually enter the Gamescape through a unique, computer-generated portal; anyone passing into the portal will have his or her atoms integrated into the Gamescape by a complicated process of quantum-mechanical osmosis.

Present at the test are Mrs. Yuriko Tashoku, President of the Psicone Corporation, her daughter Michiko, Professor T. Bird and the 'toadally awesome trio, Zitz, Rash and Pimple, otherwise known as the Battletoads.

The portal is switched on and the Gamescape is revealed: a rolling plain with four figures barely visible in the distance. Gradually, the figures get closer and are seen to be four Psyko Pigs mounted on horseback - the Pigs of the Apocalypse.

Suddenly, the pigs gallop strait at the portal, bursting through it and into the test room. One of them grabs Michiko Tashoku and leaps back through the portal. When Zitz tries to stop them, he is clubbed senseless and draped over a saddle. Before anyone else can do anything, the Pigs of the Apocalypse are galloping away into the Gamescape with their two captives - and to make matters worse, the Gamescape begins to leak through the portal into our world!

A prerecorded message flashes up on the Gamescape screen, confirming Professor T. Bird's suspicion that the evil genius, Silas Volkmire, and his malevolent partner, the Dark Queen, are behind the kidnapping and the Gamescape leakage, and it is soon revealed that he is correct: Silas has hooked himself up to a Gamescape Generator somewhere beyond the portal, with the wicked intention of transforming the entire world into his very own Gamescape kingdom, over which he and the Dark Queen will rule. Meanwhile, Michiko and Zitz are being conveyed to his dreaded lair, the Dark Tower, where they will be destined for doom if anyone tries to stop him.

But he must be stopped! - and Rash and Pimple are the 'toads to do it! 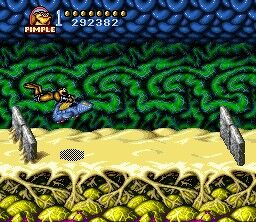 Battlemaniacs uses many of the same stage themes as the NES game, though with obvious improvements in audio and visual effects. There are only six levels, but their size and length are increased to help compensate. There are also two bonus levels and a final stage against the Dark Queen. As before, much of the difficulty comes from the various vehicle levels, which require near-perfect memorization and reflexes to survive.

One or two players can play. Oddly, there is no character select option. Instead, Pimple is always controlled by controller 1, while Rash is reserved for controller 2 unless you use a glitch where you use controller 2 to select your 1 player mode, and then quickly connect player 1's remote and disconnect player 2's remote. As with the NES game, they each get three lives, but must share three continues. A secret code can extend it to five lives and five continues. Also, there are now two 2-player modes, one in which the 'Toads can hurt each other, and the other where they're immune to their own attacks.