Boss Walker is the boss of the first level of Battletoads, Ragnarok's Canyon.

The Boss Walker is a gigantic version of the Walkers equipped with laser guns. The fight against it is unique in that it's viewed from the boss's point of view. The Boss will shoot from it's two guns while moving it's aim in a square-like pattern, dropping a rock after firing. In order to defeat it, you must pick the rocks and throw them back at the boss, which is defeated after three hits from the rocks. 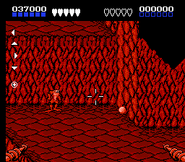 Battletoads (Amiga)
Add a photo to this gallery
Retrieved from "https://battletoads.fandom.com/wiki/Boss_Walker?oldid=6011"
Community content is available under CC-BY-SA unless otherwise noted.