Cave Pit is the fourth stage from Battletoads (Arcade).

This stage plays similarly to the Wookie Hole level from the first game, though the toads wear jetpacks instead of using the Turbo Ropes. Most of the vertical descent is spent fighting hordes of Groggs, with the occasional Snappas and Ugly Mugs to fight. During this stage the toads can grab on icons which give them a consumable Smash Hit which allows them to hit all enemies on the screen, becoming invincible for the duration of the move. 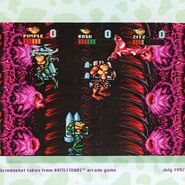