Would-be Queen of the Universe

The Dark Queen, also known as just Dark Queen, is the primary antagonist in the Battletoads series. She is usually fought at the end of the games. In the cutscenes of every game, she will taunt the Battletoads, telling them that they will never reach her lair alive. Most of her taunts are sophmoric in nature, calling them names like "Cattle Loads" or using surfer slang. Her appearances in between stages helped gain exposure, as the extreme difficulty of the games otherwise would have limited her exposure. The Dark Queen has received considerable attention due to her sex appeal among fans as well as for being one of the earliest female video game villains.

The archenemy of the Battletoads, the Dark Queen is a galactic conqueror and commander of the Mutant Ratpack. Driven only by a unquenchable lust for power, the Queen believes it is her rightful place to rule not only the galaxy, but the entire universe as well, and will stop at nothing to achieve her goals, the only things standing in her way being the Terran Corporate's army and the Battletoads. She is as equally evil and powerful as she is beautiful, and many a men have fallen victim to their combined effects.

The Dark Queen is almost always depicted as a young woman with jet black hair, a voluptuous body clad in a dominatrix-style skimpy and tight black bathing suit with high boots. In the 2020 reboot she was completely redesigned, keeping the voluminous hair, large hips, gloves and boots but losing most of her sex appeal, now being clad in a purple jumpsuit.

Throughout the games there have been several inconsistencies regarding her actual size. Even though her height is stated to be six-feet tall on her profile screen in the arcade game (which would mean she is actually smaller than the Battletoads), she normally appears to be of a tremendous size in the classic games, usually roughly four times the height of the Battletoads.

In Battletoads, the Dark Queen only has one special move: spinning until she turns into a tornado. How much damage is done to the player is based on how fast she is spinning; if she is about to turn into a tornado, minor damage is done, major damage will be done if she is completely spinning. If you happen to get close to her and don't use any moves, she will use her leg to kick you.

The Dark Queen usually appears between stages to mock and taunt the Battletoads, but she also possesses powerful magical abilities to fight back with. In the first game, her primary attack consists of turning into a tornado and attempting to hit the player. In Battletoads in Battlemaniacs, she instead teleports and attacks the players with her staff, and in Battletoads/Double Dragon: The Ultimate Team, she is capable of transforming into a flame and moving accross the floor, remaining untouchable by doing so. She will also attack by emerging from the flame and throwing fireballs. Usually, fighting the Dark Queen isn't very challenging, especially compared to reaching her.

The Dark Queen does not appear as a boss in the Game Boy or arcade games. However, she appears in Stage 3 of the arcade, in which she watches the fight between the 'Toads and Scuzz's Robo Rat, mocking and laughing at the 'Toads whenever they get hit and panicking when the Robo-Rat gets damaged.

In the 2020 reboot the Dark Queen serves as a supporting character, having lost all of her powers and being locked away for 26 years inside of a vault on a abandoned carnival. During her confinement she created both Holidays and Bratty, having been planning on getting her revenge on the Topians for locking her and removing her powers. Upon being released by the Battletoads she suggests forming an alliance, helping the group during the game to fight their common enemy.

In the Battletoads TV Pilot, the Dark Queen is after Princess Angelica for possession of the magic amulet she wears. She fights (and easily overwhelms) Zitz and Pimple by turning into a black tornado. At one point her minions are referred to as the "Beast Police."

TV pilot
Add a photo to this gallery 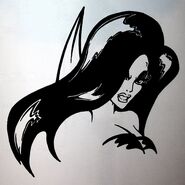 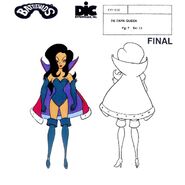 TV Pilot
Add a photo to this gallery

Battletoads (2020)
Add a photo to this gallery

Retrieved from "https://battletoads.fandom.com/wiki/Dark_Queen?oldid=7389"
Community content is available under CC-BY-SA unless otherwise noted.