The D.S.C. 13 "Gargantua" is a gigantic spaceship used by the Dark Queen as her main base of operations, appearing mainly in the first game. Its interior is comprised mainly of labyrinthine corridors and large shafts. The Gargantua was originally a security transporter of the Terran Corporate under the command of Robo-Manus before being commandeered by the Dark Queen.

Quite a few stages in the games take place either inside of it (Rat Race and Clinger Winger in the original Battletoads) or on its outside (Dark Queen's Battleship in the arcade game). 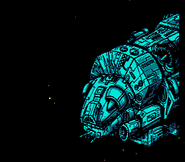