General Slaughter is a recurring villain from the Battletoads series, appearing in all games except for Battletoads in Battlemaniacs.

General Slaughter is one of the Dark Queen's enforcers who commands her army, said to be one of her least intelligent commanders despite his rank and prefering to use his head for ramming his opponents rather than thinking. Slaughter appears as a tall bull with a muscular physique and purple mohawk, wearing various outfits over the series:

In the first game, Slaughter is fought as a boss in Stage 10, the Rat Race. To reach him, you need to successfully deactivate all the bombs while racing the rat. He mainly moves forward slowly and ram the player if he gets close, getting faster as the fight goes on. The best strategy against him is to jump on his back and attack him from behind.

In the Game Boy game, Slaughter is the boss of the first stage. As such, he can be easily defeated by doing jumping attacks.

In Battletoads & Double Dragon: The Ultimate Team, Slaughter appears three times as a miniboss in Stage 5, Missile Mayhem. His fighting method has changed since the first game; he whacks the player with his hands if you get close enough to him, and if they try to headbutt him, he will attempt to charge at them with his horns.

The ferocious bull makes his last major appearance in the arcade game, where he is the boss of Level 1. He attacks much like in the Double Dragon game, charging from a distance and pounding in close range. Whenever he is knocked down the player can boot him out of the screen, after which he jumps back again in the fighting arena in the general position of the player.

General Slaughter also makes an appearance in the animated pilot as one of the Dark Queen's assistants. Oddly, he is the only one that speaks and is referred to by name. He was voiced by Scott McNeil. 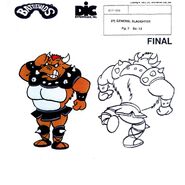