General Vermin is an enemy and villain from the Battletoads series. He first appears in the Game Boy game as the boss of Stage 7, returning in the Arcade game as a mook-type enemy.

Vermin appears as a tall, muscular rodent, wearing ragged pants, spiked shoulderpads and shades. In the Game Boy game he carries a mace/whip, which he uses as a weapon, jumping around the arena and swinging it at the player when in range.

In the Arcade game Vermin is fought as a elite-type enemy on stages 3 and 5, being much tougher than regular mooks. He mainly attacks by grabbing the player and kneeling him on the face, though the player can escape his hold by mashing the buttons. If he's hit by a Smash Hit he will counter it with a dashing kick. Given how multiple Vermin appear at once, it's more likely that "General Vermin" is a type of rank for some rats, and not a specific name.

Vermin has a very brief appearance in the Battletoads TV pilot, appearing by the Dark Queen's side inside of her UFO. 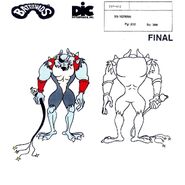