Grogg is a recurring enemy from the Battletoads series.

Groggs originally appeared in the Game Boy game as bipedal mosters with a mohawk and a mouthful of teeth. They're cowardly enemies which use hit and run tactics, attacking the player once then running away before he can retaliate.

A single Grogg appears in Battletoads in Battlemaniacs, where it was given a visual more similar to the Darkling boss from the Game Boy game, with wings which allow it to fly. In this game it only appears to drop a Porka Pig for the heroes to fight. Groggs return again in the Arcade game, with the same visual from Battlemaniacs. Here, they're common enemies in the 4th stage, appearing in large numbers and attacking by biting the player. 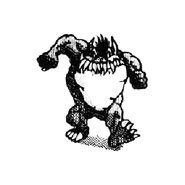 Battletoads (Arcade)
Add a photo to this gallery
Retrieved from "https://battletoads.fandom.com/wiki/Grogg?oldid=5105"
Community content is available under CC-BY-SA unless otherwise noted.