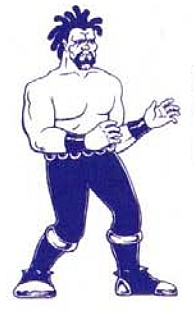 Guido is an enemy from Battletoads & Double Dragon: The Ultimate Team.

Guido is a lesser Shadow Warriors' member who was put in charge of patrolling the corridors of the Colossus. His main attack consists in a series of one-two punches until his opponent is down, although most of the times it's him the one who gets the beating. They are encountered in Levels 2 and 6.

If the player manages to arm themself with a Walker's leg, a brand new attack can be performed on this enemy, where they first poke him with the stick, followed by jumping above him, and then start poking him into the ground until they go all the way through and fall out of the screen to their demise. If left alone while mid-buried, they will will eventually dig themselves up and continue the fight.

They reappear in Level 6, Shadow Boss Showdown, merely as filler preceding the battle against the Shadow Boss.

Retrieved from "https://battletoads.fandom.com/wiki/Guido?oldid=5523"
Community content is available under CC-BY-SA unless otherwise noted.