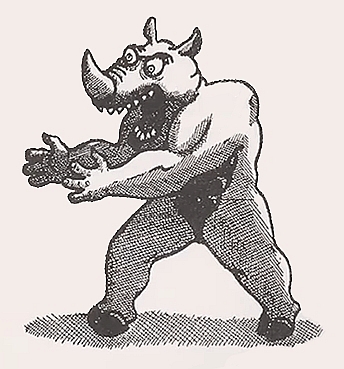 Hornhead is an enemy from Battletoads.

Hornheads appear as bipedal rhinos of either yellow or red color. Voted ugliest in their class, they now patrol the Dark Queen's tower.

Two types of Hornheads appear in the game: the yellow ones will move after the player and attempt to ram, while the red ones attempt to swallow the player, thus killing in a single hit. They all take between three or four Smash Hits to be defeated.

Battletoads (Mega Drive)
Add a photo to this gallery
Retrieved from "https://battletoads.fandom.com/wiki/Hornhead?oldid=5425"
Community content is available under CC-BY-SA unless otherwise noted.