Master of the snake pits

Karnath is a villainous snake that was first introduced in a stage named after him, Karnath's Lair in the original Battletoads. In the stage, he is a snake that changes colors as he slithers from hole to hole. He serves the same role in Battletoads in Battlemaniacs, where his stage is revisited.

In Super Battletoads, he becomes the stage boss for the Arctic Caverns. The perspective is changed when fighting Karnath as a boss. He follows a precise attack pattern during the fight where he will move around the stage, back up and prepare to attack, then lunge forward towards the player along the Z-axis. If his attack is successful, he will clamp his mouth down on the player, shake them around, and slam them three times on the stage floor. This attack can deplete up to 8 bars of health. If the player is caught in Karnath's mouth, they can mash buttons to free themselves. If Karnath's attack misses however, his fangs will get stuck in the stage floor, giving the player a chance to damage him. To damage Karnath, the player must attack him repeatedly in the head. Karnath's speed increases as he receives more damage, and will make an aggravated growling sound when he is close to dying. When he is killed, his head gets decapitated and blood sprays from his neck, and can have his head kicked off screen. 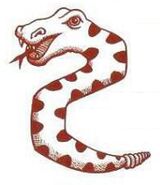