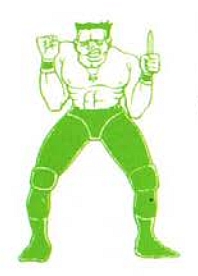 Lopar is an enemy from Battletoads & Double Dragon: The Ultimate Team.

Lopar is a shirtless bandanna-wearing thug who confronts the player throughout Level 5, Missile Mayhem. He jumps from behind background objects then follow a pattern of throwing a shuriken, cartwheeling around the screen then doing a jump-kick. He can be especially annoying when there's more than one on the screen at a time.

Retrieved from "https://battletoads.fandom.com/wiki/Lopar?oldid=5548"
Community content is available under CC-BY-SA unless otherwise noted.