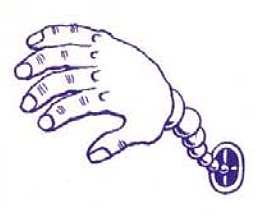 Mechno-Mitt is an enemy from Battletoads & Double Dragon: The Ultimate Team.

The Mechno-Mitt is a giant mechanical arm consisting of multi-colored rubber balls for most of their limbs and gloves for hands, that guards the tail of the Colossus near the end of the first stage. It will try to smack the player over their head and can only be attacked with an elbow drop when it is stuck on the ground. To achieve this, the player must try to anticipate its movements and dash to the other side of the screen when it is about to attack, which will make it miss and get stuck for a moment on the ground, where the player can then attack it.

The player faces another Mechno-Mitt at the end of the final stage, just before the final boss fight with the Dark Queen.

Battletoads and Double Dragon (SNES)
Add a photo to this gallery
Retrieved from "https://battletoads.fandom.com/wiki/Mechno-Mitt?oldid=5516"
Community content is available under CC-BY-SA unless otherwise noted.