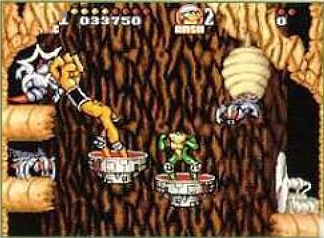 Nestz is an unused enemy from Battletoads in Battlemaniacs. Even though it is mentioned in the game's manual, it is nowhere to be seen in the actual game (the manual also have other inconsistencies, like mentioning the presence of Psyko Pigs and Rat Rockets which also never appear in the game).

Nestz is basically a beehive, which was supposed to continually spawn Wasplings until defeated and would appear in the second level, Hollow Tree. It is unknown why it was discarded from the game.

Retrieved from "https://battletoads.fandom.com/wiki/Nestz?oldid=4917"
Community content is available under CC-BY-SA unless otherwise noted.