Professor T. Bird is the main supporting character from the Battletoads series.

T. Bird appears as a scrawny vulture, wearing blue pants and either a lab coat or a sweater with the number 8 stamped on the front.

He's a enigmatic individual who serves as the 'toads mentor, being affectionately referred by them as "Coach". He is known to have an enormous intelligence and great magical talent said to rival even the Dark Queen's own powers, though he has renounced the use of magic in favor of science.

In (almost) every Battletoads game, T. Bird is often seen in the cutscenes of the games and occasionally gives the player good advice about upcoming obstacles dwelling in the levels, being also somewhat notorious for mocking the Battletoads on the continue screens.

Professor T. Bird appeared in the animated series pilot as Princess Angelica's only remaining ally, and the one who concocts the plan to create a new generation of Battletoads to protect her from the Dark Queen. He's mostly a source of comic relief, although he instructs the trio in the use of their new powers and builds the Toadster for them out of an old wrecked car. He was voiced by Michael Donovan. 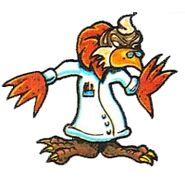 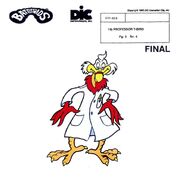 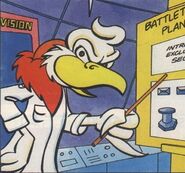