Roper is a boss in Battletoads & Double Dragon: The Ultimate Team, appearing at the end of Stage 3, Ropes 'n Roper.

Roper appears as a muscular man who holds a large machine gun, which he uses as his main weapon. At a distance, he'll shoot rapidly at the player, which can deplete life quickly if not ducked. He'll also butt the player with his gun when he gets close. The best strategy against him is to keep a distance and use dashing attacks, ducking whenever he prepares to fire his gun (he gives both a visual and sound cue when he's about to fire it). 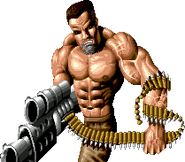 Battletoads and Double Dragon
Add a photo to this gallery

Retrieved from "https://battletoads.fandom.com/wiki/Roper?oldid=6890"
Community content is available under CC-BY-SA unless otherwise noted.