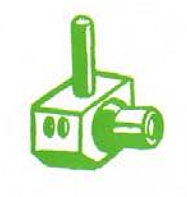 Securi-Cam is an enemy from Battletoads & Double Dragon: The Ultimate Team.

Securi-Cams are mobile security cameras/turrets that scans the inner corridors of the Colossus in search of intruders. They move from side to side along a rail near the top of the screen while searching for something to shoot at. They can be found in various locations throughout Level 3, "Ropes 'n Roper". They shoot three bullets in succession at a downward angle at determined intervals. The best method to destroy one is to jump directly at it (taking care of not being shot in the process, of course), which will make the player grab onto it and become able to smack it from underneath while remaining out of the turret's firing range.

Battletoads and Double Dragon (SNES)
Add a photo to this gallery
Retrieved from "https://battletoads.fandom.com/wiki/Securi-Cam?oldid=6076"
Community content is available under CC-BY-SA unless otherwise noted.