Leader of the Black Warriors

The Shadow Boss is one of the main villains in Battletoads & Double Dragon: The Ultimate Team, acting as the penultimate boss of the game.

The Shadow Boss appears as a muscular fighter in a dark blue armor with spiked shoulder pads and a dark blue skull-like mask. In Battletoads & Double Dragon, he is treated as the leader of the Black Warriors, having teamed up with the Dark Queen to take over the world.

During his boss fight he mainly attacks by leaping at the 'Toads and Dragons. If he can get close enough, he'll grab the player and strangle them while bashing their heads. His most dangerous attack is when he turns into a spiked ball and bounces back and forth across the screen. The only way to avoid the attack is to hang onto the lamps above (assuming the player didn't already destroy them for power-ups). 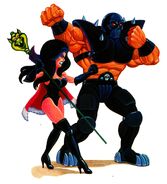