Shovel Knight is a 8-bit style platformer game developed by Yacht Club Games, originally released in June 26, 2014 for computers and later ported to various platforms. The game would later be updated to include new campaigns, focusing on some of the boss characters of the game.

The game was released in Apr 29, 2015 for the Xbox One. In 2017 this version was updated, adding a special sidequest where the player can play a sparring match against the Battletoads. This sidequest would later be added to the PC versions of the game.

In order to find the sidequest, the player must talk to the Adventurer NPC in the "Shotcut?" area, who will tell the player about a secret area in the Hall of Champions. There the player can find a secret room within the easternmost secret room, where it can obtain the Curious Map. Once the player have obtained it the Vulture will show up on the world map, and upon accessing it the player is taken to the Mysterious Area.

Once in the mysterious area the Battletoads will descend from the Vulture and challenge the Shovel Knight for what they call a training, "Battletoads-style". The first two parts of the sidequest are recreations of Wookie Hole and Turbo Tunnel, where the player faces off against Zitz and Pimple respectively. Once both are beaten then the player will face against Rash in a one-on-one boss fight. Once Rash is defeated the Toads will bestow upon Shovel Knight the exclusive Toad Gear armor, which allows Shovel Knight to use Smash Hits. 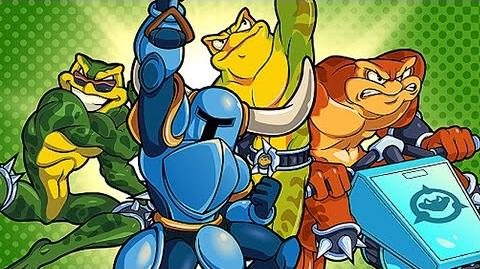 Retrieved from "https://battletoads.fandom.com/wiki/Shovel_Knight?oldid=6629"
Community content is available under CC-BY-SA unless otherwise noted.