Silas Volkmire is a enigmatic villain from the Battletoads series, being mentioned in the Nintendo Power comic which serves as the canon backstory of the first game and later appearing as one of the main antagonists in Battletoads in Battlemaniacs.

Silas appeared in the Battletoads comic as an employee of the Psicone Corporation. Though he prides himself on having created the Games Generator, he is jealous over the more visible success of the Battletoads and their "players", Dave, Morgan, and George. Out of his jealousy, Silas brings the Dark Queen into his world and allies with her by implanting a virus into the Games Generator, which traps the trio as Battletoads and leaves them in the Dark Queen's universe. He later appears in the comic to narrate a scene where the 'Toads fall into the lava of his namesake stage, "Volkmire's Inferno". Finding it hilarious, Silas continues to loop the scene ad nauseum.

In Battlemaniacs, he uses Psicone's TRIPS 21 system to send Psyko-Pigs out and capture Michiko and Zitz. Pimple and Rash are then forced to play within Silas's game. In the final part of the game, Silas slips back to Earth and the 'Toads have to destroy his escape ship before it escapes. Whether or not they're successful will result in different endings. 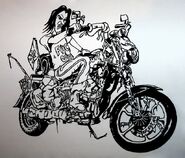 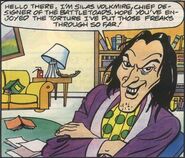