The Space Vehicle "Vulture", or S.V. Vulture for short, is a large vulture-shaped spacecraft, which serves as the Battletoads's main base of operations. Built by Professor T. Bird and controlled by a Multi-Element Logocapacitor supercomputer of T. Bird's own making, it's from there that he communicates with the toads during their missions.

The Vulture appears briefly during the intro of the first game, with the 'Toads rappelling from it to reach the first level, Ragnarok's Canyon, and again during the ending, with the 'Toads returning back after their mission is complete. Its only other actual appearance is in the Arcade game, where the first stage is set on its exterior. 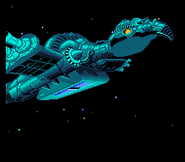